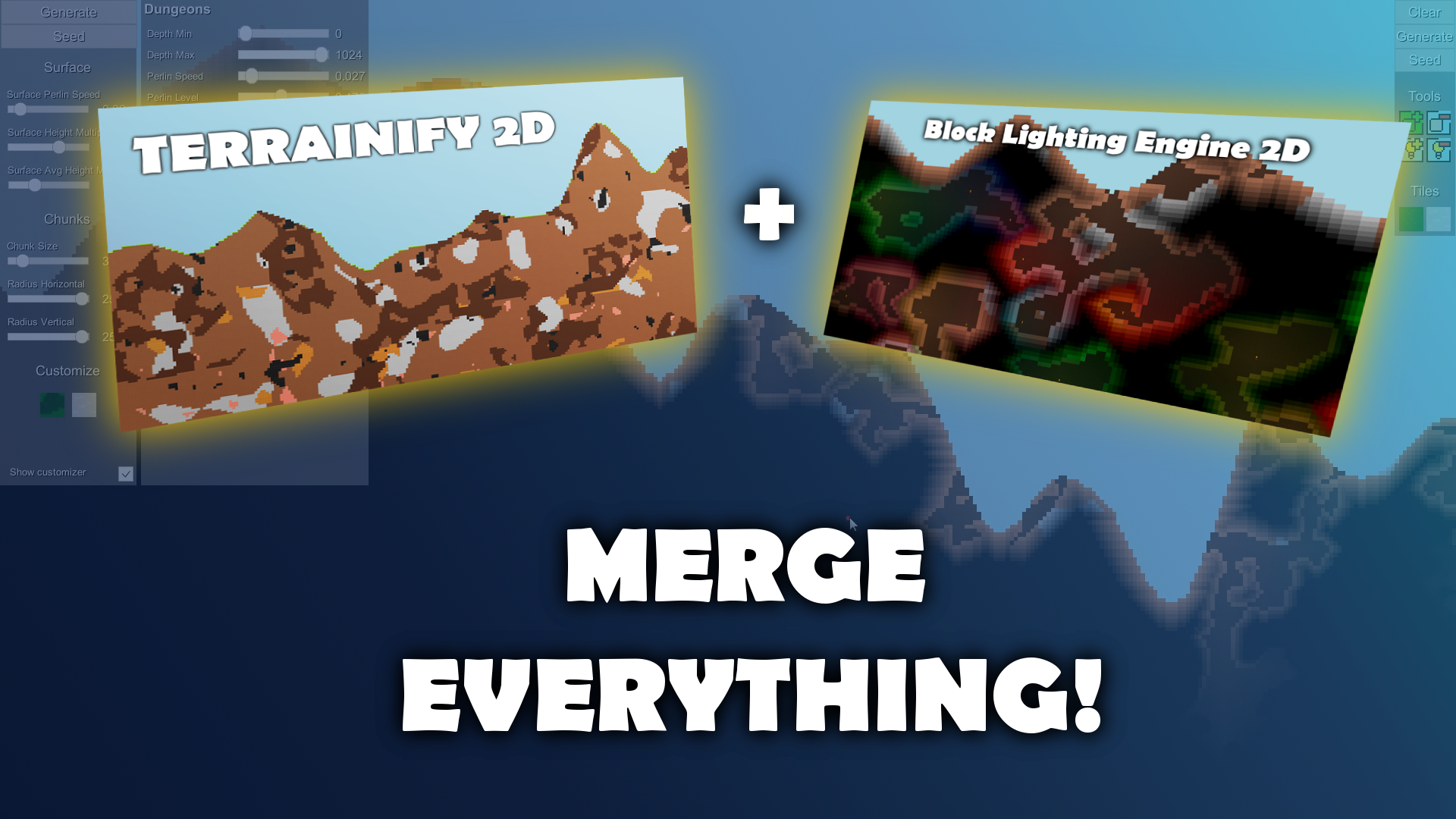 Terrainify 2D has been released for free on the Unity Asset Store for about a week now and I’m getting a lot of positive feedback about it. It even received a 5-star rating! It got me thinking about my lighting asset and, since Terrainify 2D is a free asset anyway, I decided to merge Terrainify 2D into Block Lighting Engine 2D. This will combine the powerful lighting system with a chunking system, which is high in demand, and extends it with additional terrain generation options. While I’m merging these two together I’m also extending Block Lighting Engine 2D to support more engine-like features, which was an important part of the feedback that I received! I am also going to work on greatly improving the portability of the asset, since version 1.0 just had to work for that time being. It wasn’t really hard to transfer to another project, but it wasn’t easy either! Below is a short snapshot of the merging process. It’s already coming together, but there are still some bugs to fix!

So why did I end up making Terrainify 2D free? It’s actually a mix of things, but the most important one would be that I just wanted people to be able to get into world building without much of a hassle. I personally love building worlds and I find it awesome if I could convey that feeling to other fellow creators. I simplified the generation to use just Perlin noise layering, one of the most basic tools to create something diverse, to avoid complex code and make it really easy to just download it, import it and play away with it. Even though it’s just Perlin noise you can make incredibly diverse landscapes. And I only utilized three Perlin layers at once!

Another reason would be to figure out marketing approaches more accurately. Having a free asset gets you more downloads and allows me to have more data about my customers and what marketing approaches work best. A shiny “FREE – Open in Unity!” button works better than one with a price tag attached to it at first glance after all.

At this moment the merge is well on its way and I have entered the final bugfixing and polishing round. After that I dive right into engine functionality and portability and we’re ready to go! I’m sure it’ll make a lot of people happy. The next asset I have planned will be Block Water 2D, but I have nothing concrete just yet. I might focus a bit on the actual game Evergreen instead after having an inspirational rush the other day. So many things to do, I like it!