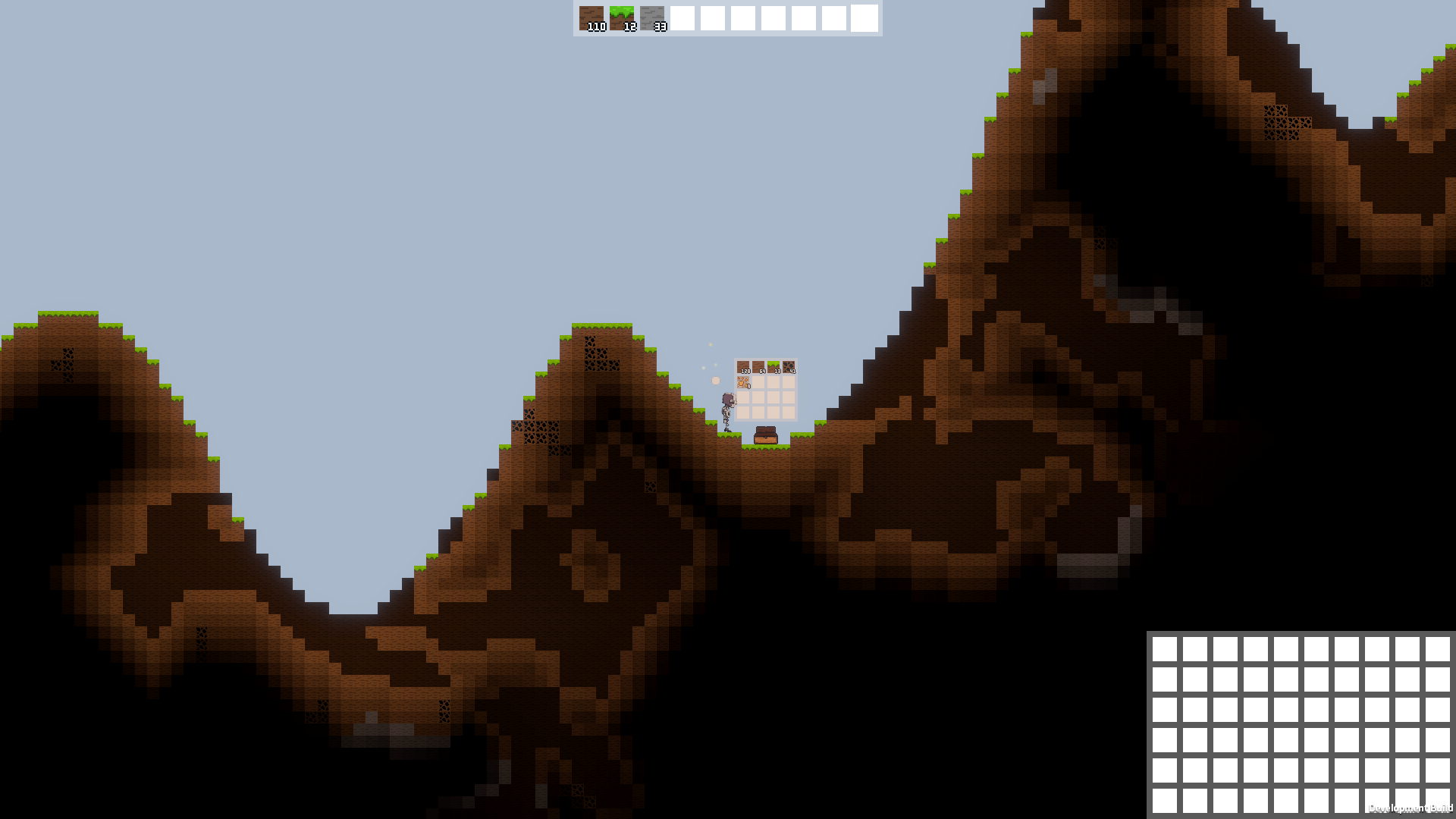 Orbis, which is its placeholder name for now, will be a 2D survival game and is currently my main focus point. Although there are still plenty of rough edges to be smoothed out in its design process that I’m still working on, it’s safe to say I’ve come a long way already.

Current state of the game

The game right now has reached the point of being a barebones playable prototype. It features my own assets Block Light 2D, Terrainify 2D, a toolbar, inventories and a player that can move around the world. Blocks can be picked up and placed as well as lights and thanks to the robust design of my assets I can edit the world right while I’m playing thanks to their standalone user interfaces. It’s really great being able to adjust the world in one playthrough to feel what is right.

I recently updated the base inventory system to support a wide range of possibilities, for example splitting item stacks, transferring items between inventory systems, slot switching and chests with their own inventories to store items:

Before I started building this game I decided to test if I had what it took to make such a game. The lighting system I wanted for example is quite formidable and I forced myself to dive into this system first before starting on the game. I started in late October 2018 and after 2 months of hard work and many breakthroughs I eventually managed to build my own lighting system from scratch, with all the intricacies needed to support my own game idea. In fact, the system worked so well I decided to sign myself up to become a Unity Asset Store publisher and turn it into an asset for other creators to enjoy. This asset is called Block Light 2D and, after submitting it at the end of December 2018 for review by Unity, it is live since January 8th. More details about this first launch can be read here.

Plans for Robronic Games were also in the works during all of this development and alongside the development process for this system I also built this website. Eventually I launched Robronic Games as my indie developer entity a few days after my asset went live. The development of this site took about 2 months as well.

After launching Block Light 2D, I decided to create my own terrain generation and chunk loading system to generate the worlds that I wanted as another asset. Chunk loading is a must for a game like this, especially if large worlds would ever be an option. In my case, at least for the time being, I wanted to be able to make very large worlds to cover a wide range of possibilities. This wouldn’t limit me with the design for my game which would come later. Right now, the ‘game’ was only a lighting asset and zero gameplay, because I wanted to test build the core systems first.

Eventually, these plans resulted in Terrainify 2D, which is my second asset. I decided that the terrain generation and chunk loading should be combined as one system. It would be tedious to have great terrain generation but no way of chunking it up and vice versa! It is also my first free asset. The main reason to make it free was to convey the excitement I had for building worlds to others, but another reason would be marketing. It was a great opportunity to gather some information about my customers, how long they stuck around, what kind of marketing would catch on et cetera. Not only for my assets, but to prepare for the game I was about to build with them as well. I did this by hooking up a Google Analytics account to my Asset Store Publisher account. Terrainify 2D took about a month to create and is live on the Unity Asset Store since February 12th.

In the meantime my lighting asset started to receive some valuable feedback. The most important feedback was the need for portability improvements. It wasn’t really difficult to transfer the asset to someone else’s project, but I didn’t make it that easy either. Especially because this was my first asset, it was hard for me to know what people would expect and how I could deliver this in the best way possible. The first thing that I did after finishing up Terrainify 2D was preparing my lighting asset for its first major update to version 1.1. This version would include Terrainify 2D as well as utilizing all the feedback I received to improve the asset.

Eventually it is my goal not only to release a game based on these assets, but to build a framework with all of these assets as one complete asset. This asset would allow anyone to make a similar game to what I am currently building right now. This idea first sprung up when I submitted my lighting asset to the store and because of this I thought of one more asset I wanted to build. This third asset is Block Water 2D and although it is technically not an asset yet, it is functional and simulates water in a grid-based environment. More details about the current development process for this asset can be found here.

After developing all of these systems and seeing them come to life one by one, it was time to start designing parts of the game on paper. I already had a few ideas in mind while developing other things, but my most prominent idea right now would be something that is inspired by many great games. Games like Subnautica, Factorio and Undertale are great examples of inspiration. I love a good story in games like Subnautica or Undertale, but I also really like the technical play in Factorio for example. Although nothing is set in stone just yet, my current story blends certain elements of these games and others together with creativity to form this game. It’ll most likely feature a storyline, together with a strong technological setting and -gameplay.

For more details about this game’s development process and other things I’m working on, feel free to check out my latest blog posts. They detail most recent events.